The book combines Neil’s athletic journey from sprinter to multiple World and Paralympic track cycling champion with his new career as a life coach. While the latter isn’t described in detail, the tactics and processes he uses are. 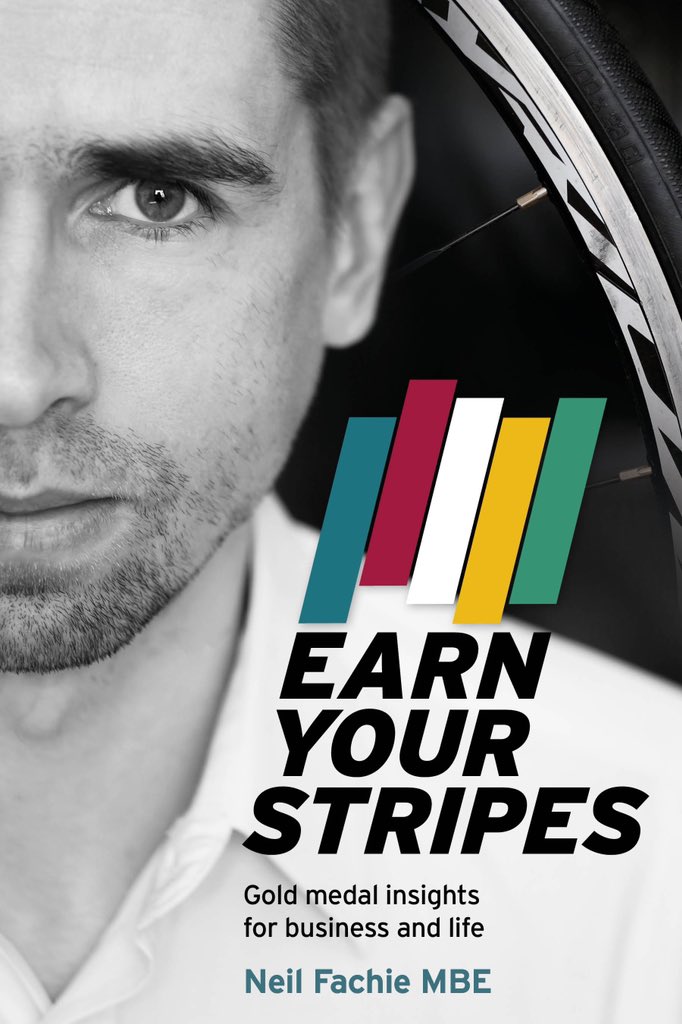 He identifies his ‘Five Stripe’ journey to success with the aim of ‘earning your stripes’ and describes how it helped him to the multiple cycling titles. Each ‘stripe’ is a chapter and is broken down further into sub-sections.

The beginning of the journey – Stripes 1 and 2 – contains the most information in terms of working models. 3, 4 and 5 focus more on high performance environments and mental acuity. All chapters relate the theory to his performance, mental state and experiences, both positive and negative.

There are times when the book seems to struggle between being an autobiography and a personal development plan, leaving the models, tactics and processes a little light at times, but it remains an engaging read.

Neil lays out his story from the Olympics in 2008 to 2012 in the form of a human story, where an athlete goes from despair and depression to Olympic glory. It’s not an unusual story and offered only as an introduction and therefore not overly deep. Earning your stripes refers to the vest of a cycling world champion or indeed the military connotation of moving through the ranks.

DRIVE is an acronym for Disrupt, Reflect, Invite opportunities, Vision and Energy and is the structure that Neil uses with his clients.

Disruption came about for Neil due to his low moods/depression – the acceptance of the need for change – and his rediscovered goal that he had lost after funding was withdrawn after 2008. If one could disrupt one’s current life, where or what would you want to do? What were your dreams as a child? Do you need to rediscover these drivers? This actually involves the self-reflection in the next stage and probably goes hand-in-hand.

Reflection is self-reflection, a chance to examine what you do, why you do it and how it is you end up doing it. Neil offers ‘Take Action’ points at the end of these sections which provide guidance on the actions and questions one should undertake. Essentially this is the ‘Where are you now’/Current/Reality stage of other models.

Inviting opportunities is a call to action; take control and put yourself in the right places to make the most of what opportunities might prevail. Build your network of influential people with whom you will gain knowledge and expertise.

Vision. A key driver for many successful people is leaving a legacy and Neil believes that you need to understand this before you create a personal vision. Are you intrinsically or extrinsically driven? Make sure it’s the former if you want sustainable success. Neil identifies that your vision is a journey to legacy, all of which is intrinsically motivated and therefore fulfilling.

This particular passage shows two things – a seeming naivety that while you get paid for something you love doing after a while your interest will wane and it becomes a chore, and the very particular place from which the book is written – a chip on the shoulder (his words) about wanting to prove that para-athletes are capable of achieving great things.

Energy is required to make all this come to life. Energy is more accurately described here as commitment to the cause/vision. This section describes the basic physiological ‘fight or flight’ response without actually mentioning the term (oddly) and is interspersed with descriptions of Neil’s world championship victory in 2009. It’s a little weak and relies heavily on the narrative.

Performance Plateau – what is it, how does it occur

Environment – lifestyle and diet. More autobiography that anything here.

Strategy – talks through what the performance looks like (marginal gains) for a major champs; building these elements into training blocks;  SMART planning

Progress Tracking – create the measures, deal with accountability, to whom do I answer? (doesn’t mention stakeholders).

Be part of a positive group – if you can

Ask for help, its natural and you’ll get responses

Use a support system

This isn’t about positive thinking but being able to either set aside issues or make them work for you to fuel your performance; one cannot eliminate negativity but it’s how we deal with it that creates the champion mindset.

Clarification clarify that the thought limits you in some way

Reflection reflect on the clarified thought and why it’s there, how often, is there a theme to it?

Extrospection while such limiting beliefs feel hugely relevant to you, with a different perspective they are often of little consequence to other people

Mantra the self-talk of high performers, of which there are 5 types:

Calming prior to performance or relaxation depending upon circumstance and activity

Motivational – positive how good am I?! Fantastic

Motivational – Negative How good are they? Great, so I need to be better

Instructional phrases or instructions that go with you: “Stay Big” (Maddie Hinch’s instructions on her water bottle), “Hard from the start”

All similar in nature with specific personal insights from cycling.

Meticulous planning prior to race day reduces opportunity for missing something crucial – reduce decision making at times of high stress.

Reframing anxiety as excitement? 2 sides of the same coin

Acceptance of the emotional response

Call upon a previous scenario contextualise the new emotion

Hold onto that thought  visualise

Overlay a stimulus create a trigger for the new emotion

Using the situation to increase emotional controlled response from defeat

Beware burn out – you are the last to see it and rarely accepting of it.

Overall
The book is an interesting read from a slightly different performance perspective (disability sports) that few of us will have experienced. Set against other publications that are designed as pure coaching and/or mentoring literature it suffers from a lack of depth; the relationship between the performance models and their application sit purely with his sporting experiences rather than an exploration of how he’s used them in his life coaching and any resultant benefit.

<Neither of the espoused models DRIVE or CREST appear in a Google search, but that might simply be because the book is new. It does offer an opportunity for a new coach / mentor to explore ‘performance’ in a very human manner as an entry level read. If you are unaware of the Sir Chris Brailsford ‘marginal gains’ approach for example, there are insights that may grab your interest. It offers itself as an easy reference we can direct coachees to.

If you are a cyclist or have a passion for disability sport or indeed an interest in how a performance athlete prepares for competition (including periodisation) then by all means read ‘Earn your Stripes’ – its an easy read that will take you through the author’s engaging personal journey of highs, lows and highs once again. If you are after more insightful literature from a broader perspective on how to take sporting coaching / mentoring techniques into the wider world I would look elsewhere.

More information is available from Neil’s website at https://earn-your-stripes.co.uk/.